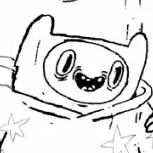 By GIF_Mr.T, edited by N_N
An edit of Mr. Game & Watch that mainly makes him function more like a conventional fighting game character, i.e. his gameplay has been overhauled. There are a few new moves here and there, like a hyper where he runs up to the opponent and uses 3 different versions of Judge on them. Comes with a slightly modified version of ouchi's AI.
As I last updated this guy 4 years ago, he's a little janky. I've since abandoned him, though he's not that bad for what he is.