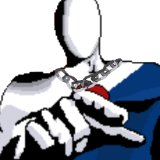 By The Pepsi In The Comments

Moonman, originally featured on Mac Tonight, is a fictional character used in the marketing for McDonald's restaurants during the late 1980s. Known for his crescent moon head, sunglasses and piano-playing, the character used the song "Mack the Knife" which was made famous in the United States by Bobby Darin. Throughout the campaign, Mac was performed by actor Doug Jones in his fourth Hollywood job and voiced by Roger Behr.

But in this day and age,

In the 2000s, internet users began to create GIFs and videos of Mac Tonight, which they called “Moon Man,” typically coupled with violent or racist rap songs using computer-generated voices. By 2015, the Moon Man meme spread to other forums such as 4chan and 8chan, where it became associated with Twitch Trolls who called themselves "TriHards" using language and imagery, including explicit white supremacist imagery. For a time, hundreds of offensive “Moon Man” songs existed online. Since then it has joined Pepe the Frog and assorted other images in the pantheon of troll graphics.

However, because of the Moon Man’s mundane and non-racist origins, as well as the fact that Mac Tonight imagery is still also used by people who are not white supremacists, care must be taken to judge a Moon Man image only in context before determining its association with white supremacy.  A version of the meme that contains no racist or white supremacist elements should not be automatically construed to have such a meaning.

(Also in my personal opinion, Moonman is another rare character not much people remember anymore sadly, the offensive memes are quite funny when you can handle an offensive joke!)