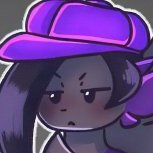 This character was made by jin, edited by Yu.

Edited the amount of power it generated automatically to 0, so you'll see that this character will gain power naturally instead of it going up by itself.